Why do we Have Christmas Stockings as a Tradition

Why are stockings a Christmas tradition and where did this come from? Every year, so many of us hang stockings on Christmas Eve without knowing why we do this and where the tradition comes from. Discover how this popular Holiday tradition came to be with the main stories and all the myths behind it.

The Christmas stocking tradition can be taken all the way back to legends of the pagan Norse mythology. There are also stories involving the Christian faith and Saint Nicholas. The truth is, we don't know for sure exactly how this tradition started. However, it is clear that the idea of using stockings stretches a long way back into history.

It is an age old custom that could have stemmed from Saint Nicholas, Norse and Scandinavian mythology or both. It could even be a fusion of the two. Why not read both the Christmas stocking origin stories on this page and see which one you prefer.

Note: This post may contain affiliate links for which I can be compensated.

Why do We Hang Stockings at Christmas

Saint Nicholas wanted to help a father who had no money for his three daughters to get married. To gift money without causing the father any embarrassment, Saint Nicholas secretly put a bag of gold coins into each girl's stocking.

The stockings were hung over the fireplace to dry overnight. The girls found the money in their stockings when they went to put them on in the morning.

Word soon spread of this miracle and, ever since, children hang up stockings on Christmas Eve hoping for gifts to magically appear.

Two Tales of Why do we Hang Stockings on Christmas Eve 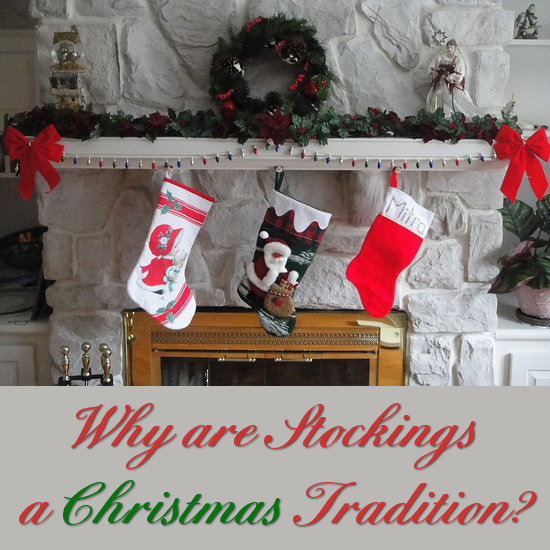 Image Credit: Original image shared by rosecoutre0 on Pixabay with a CC License

The short answer to why we have Christmas stockings as a tradition is given above. However, there are actually two main tales on how this tradition of hanging stockings by the fire on Christmas Eve started. Both traditions will be explained and examined in more depth below as you read this article.

Over the centuries and the years, this tradition has evolved from using a pair of every day stockings that were worn. Nowadays we tend to put up elaborately decorated stockings which are only intended to be used during the festive season.

It does indeed appear that the ancient Norse tale was perhaps merged with more of a Christian meaning and sentiment attached to it down the centuries. Either way, the tales are nice to know and share during the festive season and you can read both of these below.

Of course, the gifts given in the Christmas stocking have also evolved tremendously. In the beginning, fruits and nuts were commonly used and appreciated but, these days, anything that fits into a stocking is fair game since both children and adults are hoping for more expensive surprises. 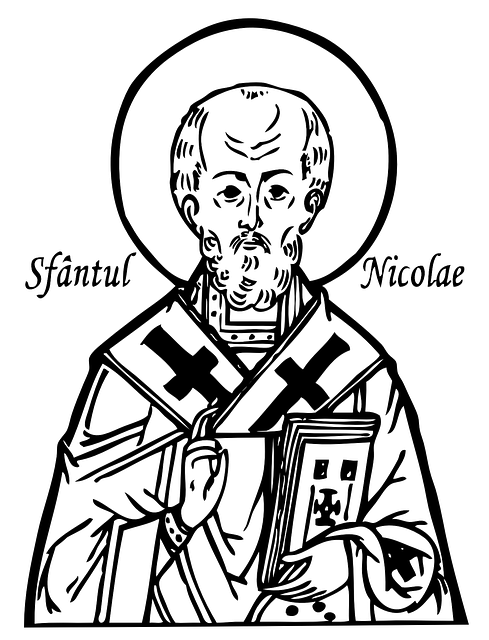 Image Credit: Original image shared by OpenClipart-Vectors on Pixabay with a CC License

This is the popular tale of the Christmas stocking tradition that is favored by the Christian religion. Here is my own re-telling of this legend.

A very poor man was blessed with three beautiful daughters who he loved very much. Like any good father of the time, he wanted to see his daughters married and happily settled while he was still alive. But there was a big problem with that.

Unfortunately, he was so poor that he had no dowry that he could offer to any prospective husbands. And a dowry, which may include money, goods or property, was a custom that was essential to any marriage match.

The poor man was sad because he feared that his daughters would never be able to marry due to having no dowry to give. He was also worried and concerned about who would look after his daughters when he died.

One Christmas Eve, Saint Nicholas happened to pass through the town where the poor man and his daughters lived. He heard other people talking sadly about the poor man's predicament.

Saint Nicholas was determined to try and help this man but he did not want to risk insulting the man further by offering him charity or to risk having his offer of help refused. So he had to think up a clever plan which would help instead.

That Christmas Eve, the three daughters happened to hang their stockings up by the fireplace so that they would dry while they were asleep and be ready to wear the next day. Saint Nicholas saw the stockings on the mantel and took the opportunity to sneak in and place a small bag of gold into each one.

On Christmas morning, the daughters all had a happy surprise when they took down their stockings and found the gold inside. This family had been blessed with a gift that would allow each girl to marry and be happy. They did not know, at the time, where the gold had come from but it must have seemed just like a real gift from heaven.

Eventually the word of this extraordinary tale spread and people started to believe that all unexpected gifts must have come from Saint Nicholas.

This saint, who was said to be compassionate, caring and with a reputation for gift giving, later became synonymous with Father Christmas or Santa Claus. In some countries he is said to visit on Christmas Eve and in other countries on December 6th which is St. Nicholas' Day.

Why Oranges were a Traditional Stocking Stuffer 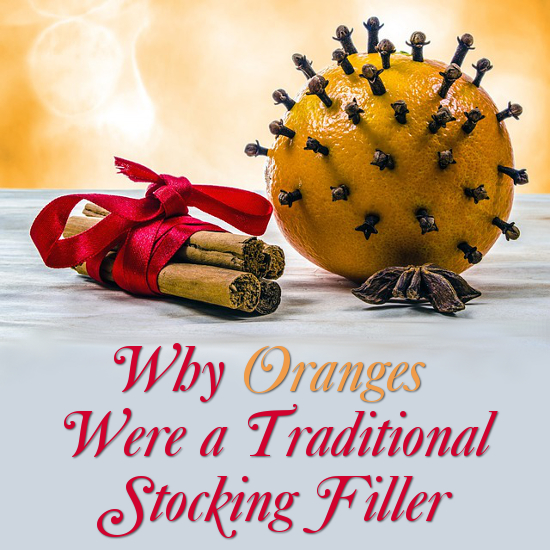 Image Credit: Original image shared by PublicDomainPictures on Pixabay with a CC License

Oranges, a traditional fruit to use as stocking stuffers, are believed to represent the gold coins that Saint Nicholas left in each of the stockings belonging to the poor man's three daughters.

While oranges are now seen as a common and readily available fruit, they used to be an exotic fruit that would be a special and luxury food which only rich people could afford to buy.

So oranges were used in a symbolic sense to represent the story of the gold coins and because these golden orbs of fruit were also equally precious.

Many children would now be disappointed to find an orange, or indeed an apple, in their stocking on Christmas morning. This is understandable because these fruits are now so readily available.

However, it is part of an old and treasured tradition that is wonderful to remember. Perhaps you could try offering this golden fruit along with the story of why it is in there and why it used to be so special. A reminder of what gift giving is really about.

Yule was a pagan winter festival and one of the traditions of this time was the belief that Odin, the Viking God, would travel around Earth on his eight-legged horse called Sleipnir and deliver much needed gifts of bread to those who were poor and in need.

Children began to fill their boots with tasty treats for Odin's special horse such as carrots, straw and sugar. The boots would be left near the fireplace so that the horse could easily come down the chimney to eat while on his travels.

Children who were kind enough to think of Sleipnir were soon rewarded with treats of their own left in their boots or shoes by the visiting Odin.

You can see from this ancient tale how similar it is to the story of Father Christmas who has eight reindeer flying him and his gift laden sleigh from home to home on Christmas Eve. Eight reindeer instead of an eight legged horse!

And now special stockings that actually look like boots are traditionally hung at the fireplace instead and the belief that Father Christmas comes down the chimney to visit. Happy Holidays to you.

Go Back to Read a Section You Missed

A Christmas Carol Story by Dickens

The comments to this entry are closed.