Irish Santa Claus figurines are the ideal display item to use for the Holiday season for anyone who is fascinated by Ireland and Irish heritage.

There is something really magical about an Irish Santa and the green colors he comes robed in are perfect for the Christmas season as well as for occasions such as St. Patrick's Day as well.

If you collect figurines for Christmas, it is fun to collect Santa figures from other countries and cultures around the world. In that case, this one from Ireland should really be top of your list.

Note: This post may contain affiliate links for which I can be compensated. Image Credit: Shared by Kate Haskell on Flickr with a CC License

⭐ Take care to choose a decorative Irish Santa figurine that really appeals to your own idea of what this character looks like. 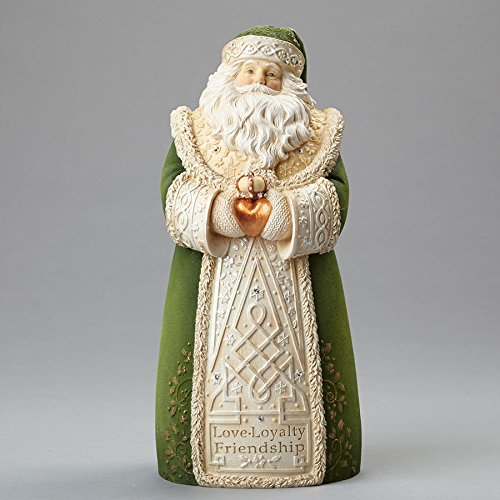 View this Heart of Christmas Irish Santa by Enesco on Amazon.com

What could be a more traditional looking Irish Santa figurine than this Heart of Christmas design by Enesco. This Celtic Santa Claus is clad in soft green and cream colors and is carrying a gold color heart in his hands. 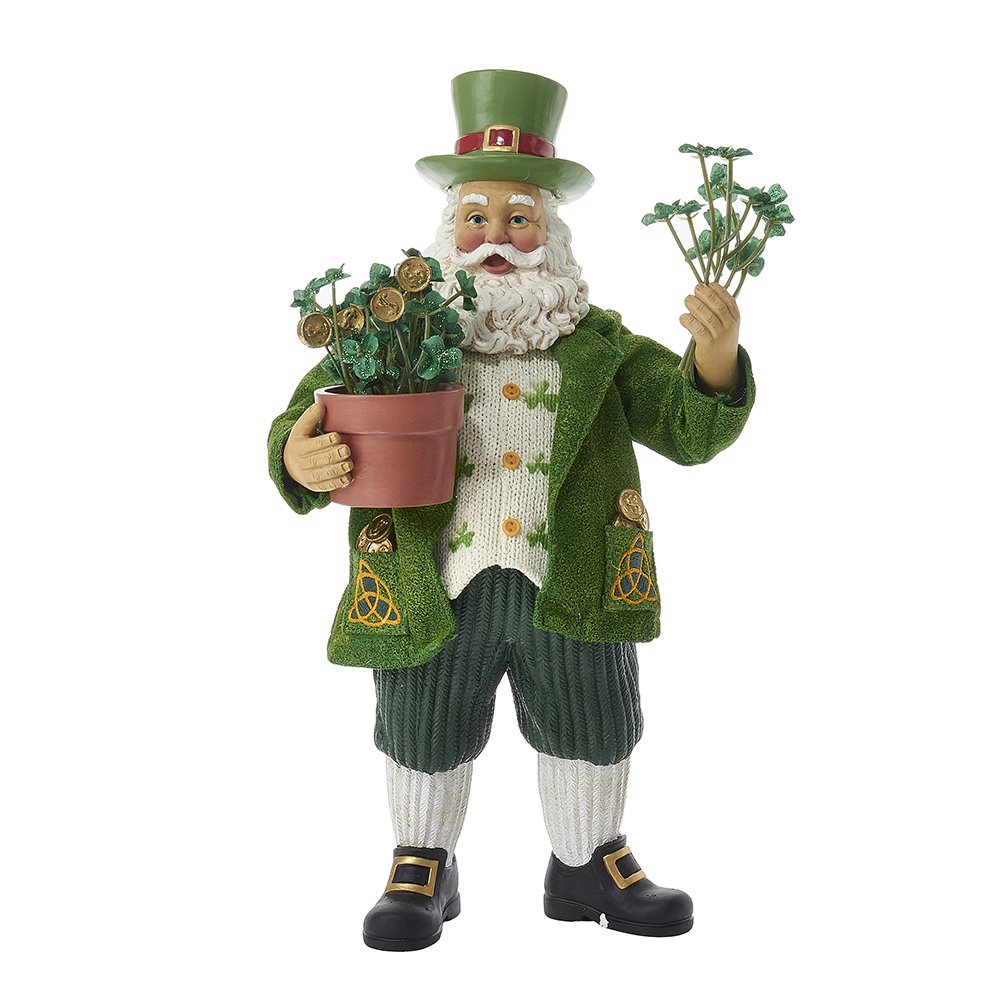 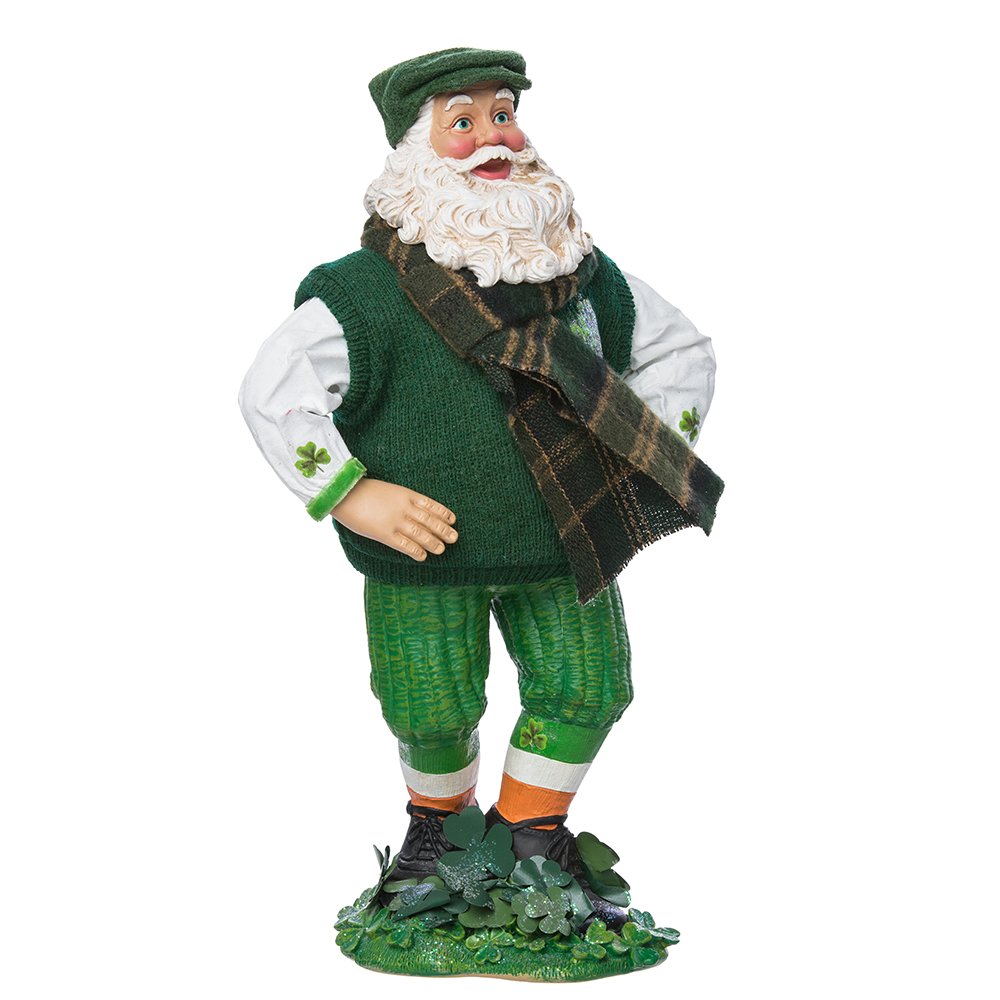 The heart in this Enesco design cleverly forms the very traditional Claddagh symbol which is an Irish motif formed from a heart, hands and a crown. The symbol means love, loyalty and friendship which is inscribed on the bottom of this figurine.

Celtic knot work designs and snowflakes feature on the front of this Santa's long gown and adds to the richly detailed styling of this display piece. 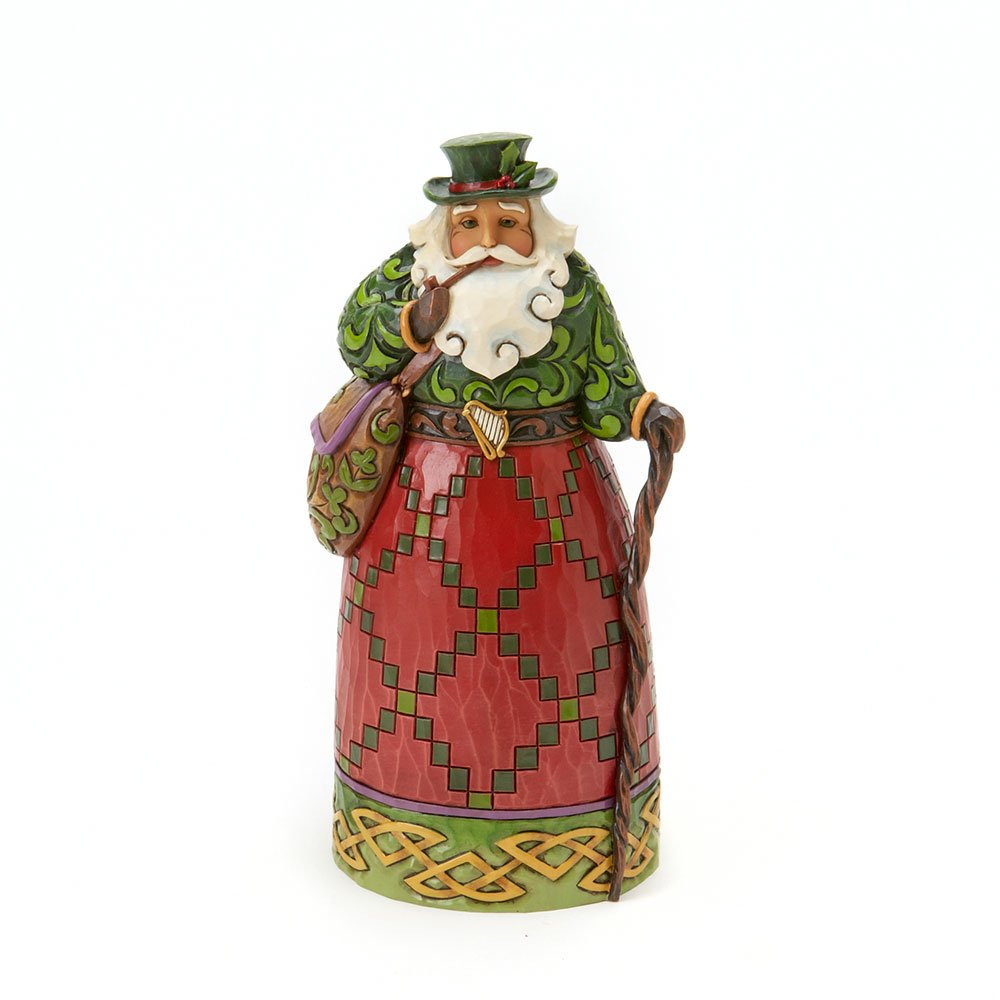 Get this Jim Shore Irish Santa Claus Figurine from Amazon.com

Jim Shore has designed this richly colored Irish Santa figurine. He comes in the traditional Christmas colors of red and green along with a touch of white for his beard and eyebrows. Small hints of a golden yellow are used sparingly to lend more of a festive touch. 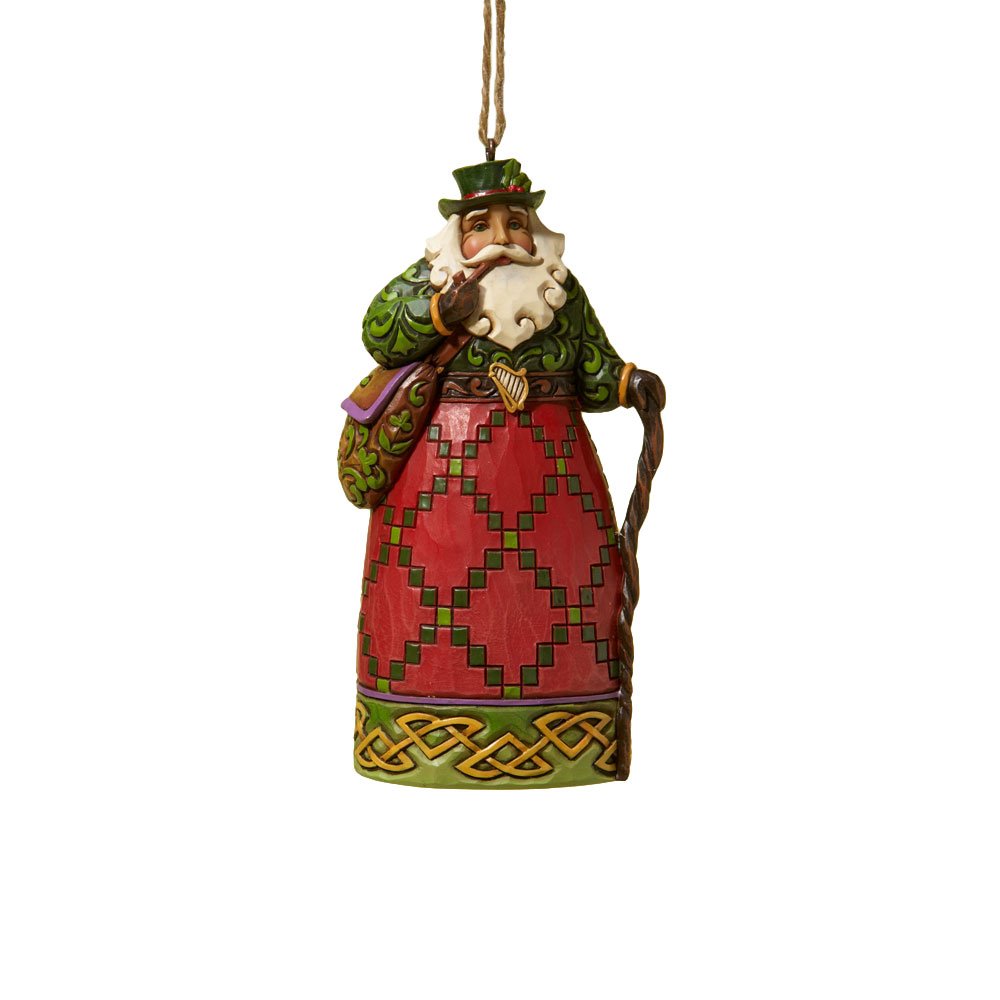 Get this matching Jim Shore Irish Santa hanging ornament to match up your festive Holiday decor.

Santa's robe is adorned with some yellow Celtic knot work which draws the eye towards the most telling Irish symbol on his belt which is known as the Irish, Gaelic or Celtic harp.

The Celtic harp is one of the national symbols of Ireland and is featured on Irish coins and official documents as well.

More widely recognized by most will be the shamrock design, the 3 leaf clover, which has been used on Santa's bag.

I also love how this figurine has this wise old man using his pipe. It makes the character look really authentic and just how you would expect an Irish version of him to look. 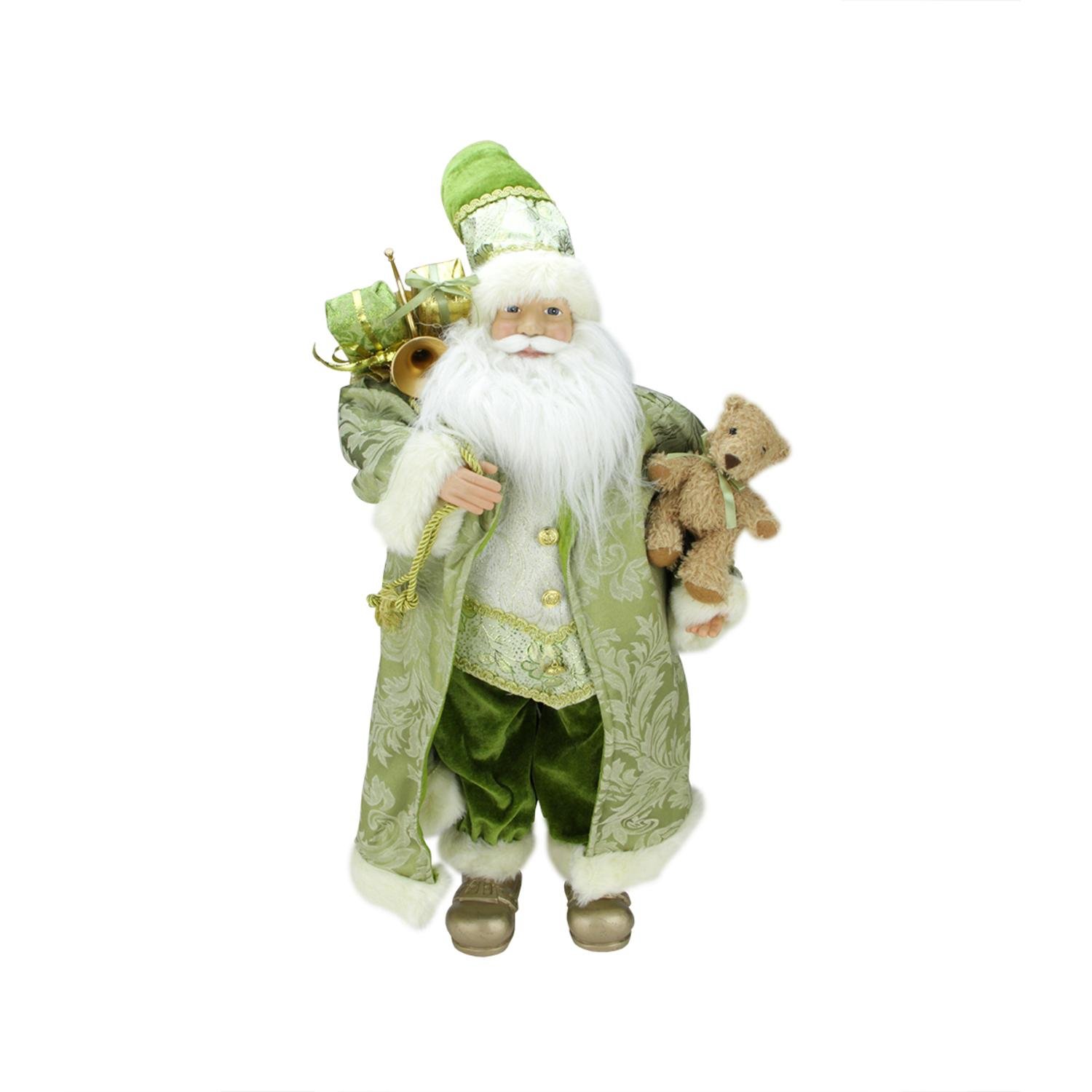 Kurt Adler has a great range of figurines and decorations for display in your home. I picked out this wonderful looking Irish Santa (not pictured) who is smiling, happy and rosy cheeked. This one looks as though he is more than ready for a cheerful celebration of Christmas or St. Patrick's Day.

This smiling figure is clad almost all in an Irish shade of green along with a traditional top hat and black buckle shoes. The best addition is the black pot of gold at his feet which is full of gold colored coins.

A very colorful rainbow flows from his hand and into the pot of gold which is decorated with shamrocks. It is part of the Kurt Adler Fabriche collection.

Because this figurine looks so happy and cheerful, he is surely ideal to place out on display for any cheerful Irish celebration or theme. These figurines are composed from a selection of materials including fabric. 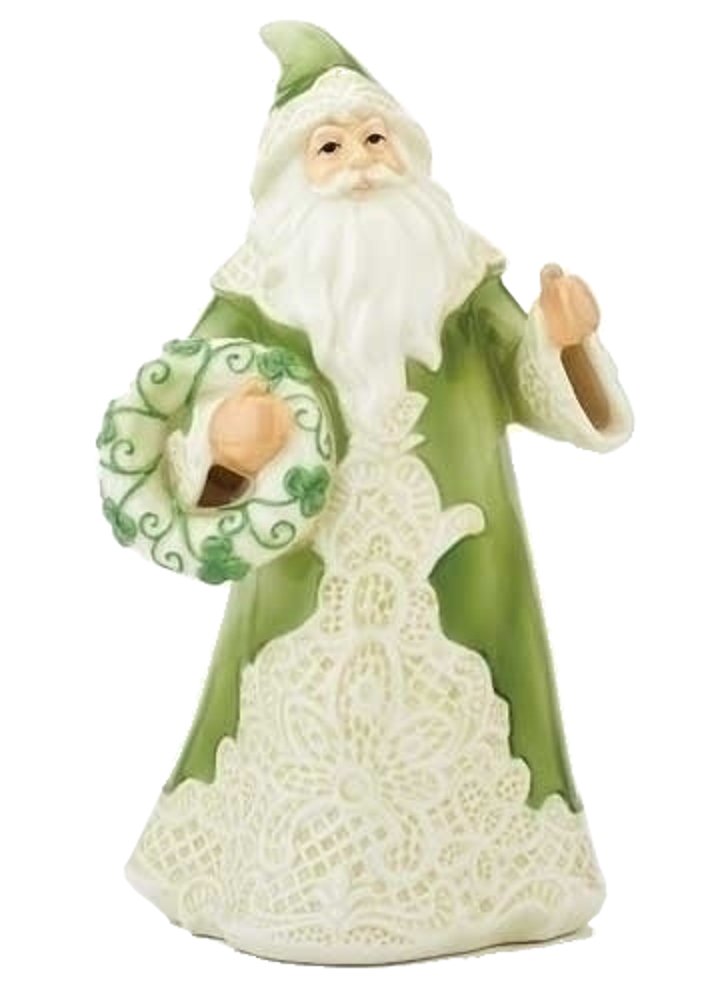 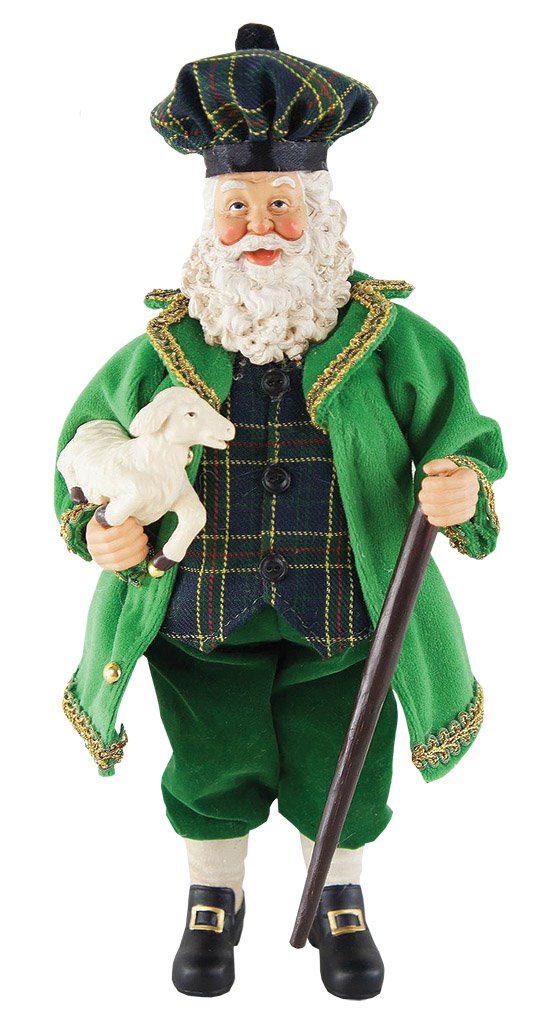 There are more Irish Santa Claus figurines that you can look out for and many from the Kurt Adler range. There is a cheerful drinking themed one holding a beer barrel.

Ireland is known for Guiness which you can sample in their Storehouse in Dublin. I visited that many years ago and it was a great experience although be prepared for how cold it gets in winter.

For more of a religious looking design, there is Santa holding a staff which looks like a Shepard's crook. A gold color Christian cross dangles from his shamrock lined sack of gifts and he is wearing a wonderful green cloak trimmed with white faux fur. This one is musical too and plays When Irish Eyes are Smiling.

The comments to this entry are closed.